Brumby Hall – UGA 2213 (1966, Category 2); Russell Hall – UGA 2212 (1966, Category 2). Brumby and Russell Halls were built in the modern style in 1966 and 1967 respectively along Baxter Street, west and uphill from Creswell Hall and the low-rise dormitories. Russell is named for the late Senator Richard B. Russell, class of 1918. Brumby Hall was named for Anne Brumby, the second dean of women, who worked to secure adequate housing for women students in the 1920s.

The two buildings are nine-story brick towers, cross-shaped in plan, with a central core and four wings. Brumby Hall has four nine-story wings and a diagonally located entrance pavilion at the ground floor level. Russell Hall has three nine-story wings with a fourth entrance wing that is two stories high. While both buildings are brick, they differ in design detailing. Brumby Hall has small aluminum windows, a stucco first floor level, and stucco stair towers at the ends of each wing. Russell Hall has larger aluminum windows, vertical concrete accents, concrete cornice band, and rows of windows with precast concrete spandrels at its central core.

Architecturally, the two buildings are less distinctive than the earlier dormitories, and like Creswell Hall, lack human scale. The buildings retain integrity and appear to contribute to a National Register-eligible historic district. They are assessed as Category 2 resources.

The character area features outdoor recreational facilities, paved walks, plantings, parking, and spaces designed to accommodate student life. Further study of this area is merited to consider what aspects of the landscape are historic and which aspects are more recent additions. Those landscape features that were developed in conjunction with the dormitories and possess integrity and contribute to the historic setting of the character area. 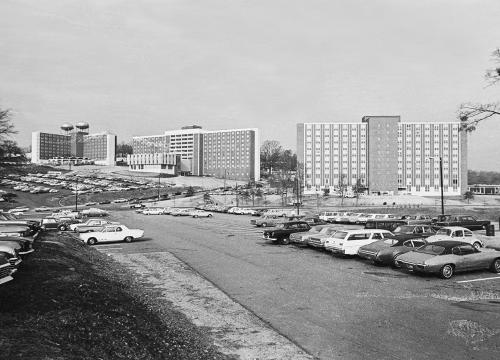