Driftmier worked with architect Roy Hitchcock on the planning and design of many of the Public Works Administration era buildings on campus. He also helped to create eighty other buildings at sixteen schools system-wide.

Driftmier Engineering Center is comprised of a rectangular two-story building facing Brooks Drive with a large one-story rear structure behind. The front building is horizontal in design. It is comprised of a central entrance form, slightly raised and projecting, of brick and stone or cast concrete with a projecting aluminum canopy over its aluminum entrance doors.

The brick wings to each side feature thin horizontal concrete bands that frame a series of horizontal aluminum windows. The windows have thin muntins of natural aluminum in a grid pattern. The overall composition of the building is restrained, delicate, and characteristic of its period. The one-story structure behind, actually a series of buildings, is simple and industrial in character. The annex is a freestanding structure at the rear of the larger building.

Driftmier Engineering Center is significant as a simple statement of Mid-Century Modern design at the University and is also significant for the central role that the engineering school played in campus development during the 1930s. The build retains integrity and appears to contribute to a National Register-eligible historic district. It is assessed as a Category 2 resource.

An access road leads into the property from D. W. Brooks Drive. The road encircles the buildings, and is edged by parking. Foundation plantings occur along the principal facade and in association with the annex. The character area is otherwise wooded. 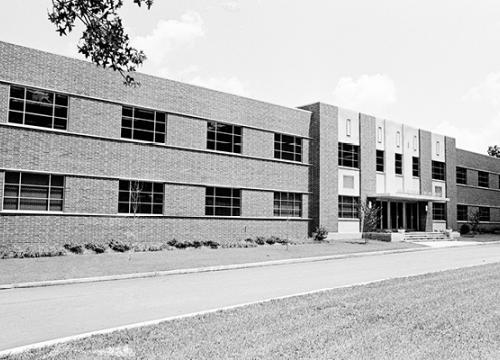