Old Administration Building – UGA 4601 (1954, Category 1). The Old Administration Building forms the northern edge of the character area. It is located along Research Way, the internal road that links the institutional buildings facing Moore Highway. To the south of the main entrance, which is reached via a ramped walk, is a commemorative monument composed of a concrete walk and large boulder of native stone inset with a plaque. There is also a flagpole set in the turf panel nearby. There are no plants in front of the building, which is otherwise open and not vegetated.

The Old Administration Building is a two-story brick structure with a hipped asphalt-shingle roof. With its central entrance, hipped roof, and symmetrical facade, the building echoes the character of the earlier H. H. Tift and Animal and Dairy Science Buildings to its south. One-story wings with flat roofs extend from both ends of the building and to the rear, which creates a service courtyard at the back of the building.

The front entrance of the Old Administration Building has a decorative aluminum surround that is reminiscent of Art Deco and helps give the building a modern appearance. Large aluminum windows with horizontal muntins and operable sash are organized symmetrically on the facade and grouped within a concrete frame in the one-story wings. The bright aluminum, horizontal lines, and clean, flat masonry openings of the windows reinforce the building’s modern appearance.

The exterior walls of the building are comprised of salmon-colored brick with flat, cast concrete string courses, window sills, and cornice. The brickwork has exhibited severe vertical cracking which appears to be due to settlement. At the time of the survey of the property conducted for this report, foundation repairs for this condition had just been completed, and it was expected that repair of the cracked brick walls would be undertaken. The Old Administration Building has a high degree of historic integrity on both the exterior and interior. It is one of the most notable buildings architecturally on the campus, and appears individually eligible for listing in the National Register of Historic Places. It is therefore assessed as Category 1. 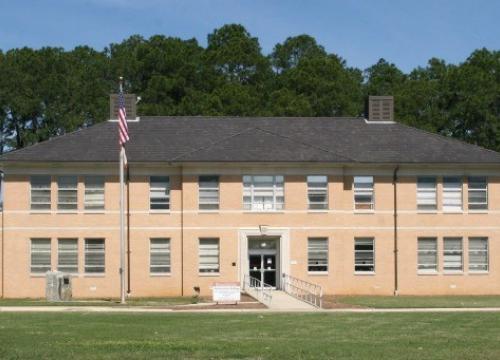